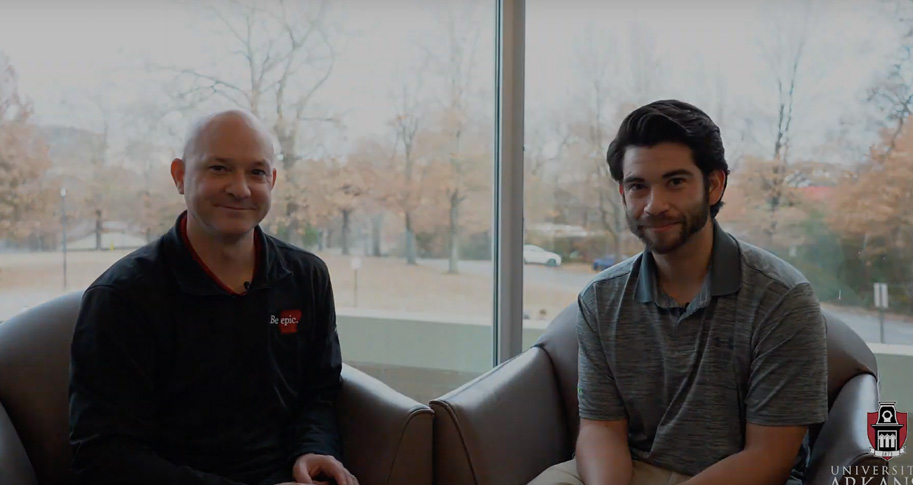 00:00 Dominic de la Guardia: They say, "No excuses," which is just something that I've always lived by. So whenever I was going in and interviewing with other companies and stuff, it just didn't match up to what Coyote was.

00:27 Brian Fugate: We're here with Dominic de la Guardia, who is a Supply Chain major and with a minor in marketing, and a minor in ERP, graduating in Spring of next May, May 2020, correct? Dominic interned with Coyote Logistics last summer, and you've actually accepted a full top position. I'd like to hear about what you did this past summer.

00:53 Dominic de la Guardia: Yeah, this summer I was in the collaborative transportation management or CTM department. And my daily tasks were scheduling pick-up and delivery appointments at shippers and receivers from the CSRs on the account. They would send over full truckload and less than truckload orders, so I would put those in our system. Create BOLs and email them back to them. Also tracking loads was huge just to make sure everything got there on time. And then I would also send reports every other week to the people on that account mostly about on time pick-up and on time delivery percentages.

01:34 Brian Fugate: So thinking about when you came in, what were some maybe roadblocks that you ran into and how'd you work through those?

01:43 Dominic de la Guardia: So, for the first two weeks during that classroom setting, you're really trying to get familiar with the terminology used in the industry. And the biggest thing was the technology as well. But the system that they use, it has a million different capabilities, and along with that, there's another million ways to do one thing. So learning the whole system and how it works, that was definitely the biggest one.

02:07 Brian Fugate: I know that you did a, you participated in a sales competition here. Tell us a little bit about that.

02:13 Dominic de la Guardia: The sales competition was great, especially the team aspect of it. You had a partner, and for that, it was the case study was with a company that does what Coyote does. So getting that side and trying to sell their services to a fake, not really a fake, but a mock company. I really enjoyed that because that kind of inspired me, like eventually this is what I wanna do. I wanna help customers move their stuff from point A to point B as efficiently as possible. So, that was a really fun experience, really rewarding.

03:02 Dominic de la Guardia: Whenever I return in August, I might start where I left off, possibly on the same team, I'm not really sure. But whenever I do, within the first little while that I'm with the company, I would definitely like to do a bit of a departmental rotation just to get a feel for everything, see where my strengths and weaknesses are. And then eventually I would like to move into that customer sales role.

03:26 Brian Fugate: I know you talked about how awesome the team that you worked with was this past summer, can you think of maybe one person who was especially influential?

03:36 Dominic de la Guardia: Definitely that would have to be my mentor, he was great. He was more than willing to answer any questions that I had. And along with that, he also let me shadow other people in the department. So, one day I shadowed a capacity manager for a little bit, a supply chain engineer, a project manager, even somebody on the LTL team. So just to see how all the pieces of the puzzle came together was really beneficial.

04:00 Brian Fugate: Very interesting. So you decided to go work there full-time, and I know previously you had had an intern at Pam, Coyote, now you're going full-time there. Think through your process of... Well, I guess, first of all, how did you get your internship?

04:16 Dominic de la Guardia: I found out about them on Handshake.

04:19 Brian Fugate: Good. Well, good for you, that's why the way we're supposed to do that. And then obviously your full-time came through working there this summer. How did you process thinking through, 'cause I know you had a lot of opportunities, going back to Coyote?

04:34 Dominic de la Guardia: The culture there was incredible. You hear about culture nowadays being a big part of where you wanna end up and where you wanna work. I've never encountered another company culture like Coyote's, they really invest in their employees. I mean, during our internship, we had... I mean, I had a great mentor who let me shadow other people, but then we also had other roundtable discussions. We even got to sit in and listen to the head of marketing tell us more about how transportation companies market themselves and stuff like that. And even got to listen from a group of a panel of former interns that went full-time. But yeah, it's they work hard, they play hard. They say, "No excuses," which is just something that I've always lived by. So, it was... Whenever I was going in and interviewing with other companies and stuff, it just didn't match up to what Coyote was. So.

05:31 Brian Fugate: Good answer. It's great that you're really at such an a early point in your career have decided to focus on the culture and making sure that that fit was there. Was part of it because you're a hockey player?

05:45 Dominic de la Guardia: So like I said, whenever I first found out about the company, I watched their culture videos. And so I knew right away this would be a fun place to work. And then going to the office itself and seeing it was another experience that just solidified like, "This is where I wanna be." But yeah, they...

06:00 Brian Fugate: Yeah, okay. Yeah, we have hockey in Arkansas, so just in case they didn't know. Very cool. So, that's pretty exciting. Now, taking a step back and looking at your program here, your four years here, you've done very well. Which course stands out for you?

06:00 Dominic de la Guardia: Just to see... I didn't even know what supply chain was whenever I came here. So, to sit in that class and have her explain all the different aspects that go into supply chain, being not just logistics, but everything else. And just seeing all the opportunities and hearing from other people saying there's many different routes you can take, no pun intended. But...

06:00 Brian Fugate: So true, so true. So, now thinking about if you were talking to your earlier self or your classmates, what advice would you give them?

07:06 Dominic de la Guardia: My biggest piece of advice, well to a younger me would be: Don't worry, everything happens for a reason. Everything's fine, 'cause I tend to worry about the little things. But to anyone else, I would tell them there are so many resources here, utilize every single one of them. Whenever I came to visit, they told me that 88% of students have a job in hand whenever they cross the stage of graduation. So that was my goal. And there's no reason why it shouldn't be 100% from this university.

07:43 Dominic de la Guardia: I just love how you walk into a room and everything in the room at one point or another was on a truck, a plane, a boat. Supply chain's just everywhere. So.

07:58 Brian Fugate: Well, thank you so much, Dominic, for taking the time.

Find people with our department directory.

Part of the Sam M. Walton College of Business
Located at the University of Arkansas