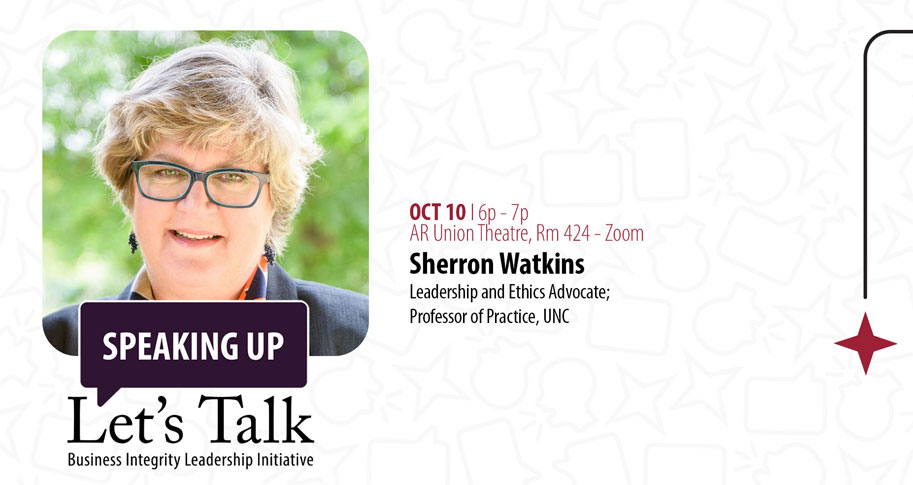 On October. 10, the Business Integrity Leadership Initiative continued its “Let’s Talk” series with speaker Sherron Watkins, former VP of Enron, and famous whistleblower of Enron. Watkins has been recognized for her courage countless times even receiving the great honor of being named Time magazine’s 2002 person of the year alongside Cynthia Cooper and FBI Special Agent Colleen Rowley.

Watkins began her presentation by giving us a small glimpse into her extensive 20-year professional career. Watkins worked for Arthur Andersen, a well-respected and established accounting firm during late 90s to early 2000s.  Watkins later left the firm to work for Metallgesellschaft AG, formerly one of Germany’s largest industrial conglomerates. Watkins then joined Enron in 1993, where she worked her way up to vice president.

Watkins said her early days working at Enron felt like a dream, everything seemed so innovative and new. She was amazed by how Enron felt like a startup, but with the funding and capital safety net of a large, established company. Watkins also discussed the amazing benefits that Enron gave to employees, including large amount of stock options and 401k matching. Watkins said all these factors made Enron an amazing place  - at least on the surface.

Watkins also discussed how the culture at Enron became quite toxic while she was there.  It became a place where transparency and open communication were not truly valued.  Those who tried to raise issues were either fired or demoted and that had a huge chilling effect on others coming forward. In 2001 Watkins discovered some problematic accounting figures on Enron’s financial statements.  Then CEO Jeff Skilling had quit abruptly, and Chairman Ken Lay had stepped in.  Watkins believed that with Skilling gone, Lay would be receptive to hearing her concerns. She wrote a letter to Lay and met with him shortly thereafter.  In the memo Watkins expressed her concerns that due to the accounting irregularities she found, she thought Enron could implode and fail as a company if the issues were not fixed. As Watkins described, she was extremely nervous, staying up weeks in advance over the stress and importance of the upcoming meeting with Lay. After formally addressing the issues with Lay in person Watkins found a great burden lifted from her shoulders, but to her surprise Lay didn’t welcome her news.  Instead of fixing the problems, as Watkins thought he would do, he tried to fire her and sidelined her within the company. (It only took about 43 days for the company to enter bankruptcy so things were moving fast.)

As more information about the Enron scandal began to surface publicly Watkins was not immediately known to the public as the whistleblower. Watkins became known to the public as the whistleblower when the memo she wrote to Lay was found by Congressional staffers in a box of Enron documents.  The memo was leaked to the press and published by the New York Times Within days after that, Watkins mentioned that she had reporters camping outside her house to ask questions about Enron. Watkins became a key figure in many of the court cases regarding Enron, and she testified in front of Congress about the matter. Although Enron declared bankruptcy in December 2, 2001, Watkins found that the trials would go on much longer, even having to testify in 2006 during former CEO Kenneth Lay’s trail.

During the presentation, Watkins stressed the importance of tone at the top, with leaders who exemplify the right culture through their actions every day. When asked in hindsight if she would have done anything differently, Sherron shared that she wished she had taken more people with her when she went to talk to Lay.  That way it would not have seemed that she was just a lone voice.

Today Sherron Watkins teaches and travels around the world sharing her brave story to students, businesses, and more. Sherron continues to encourage those around her to follow in her footsteps and make speaking out against fraud in the workplace the norm rather than the exception.

The initiative strives to foster a culture of integrity, and promote thought leadership and inquiry among scholars, students, and business leaders to address the ethical challenges inherent in our increasingly complex business world. Learn more...

Engage with our initiative on social media, and get updates from our email newsletter.