What Percentage of Truck Drivers Are Female? 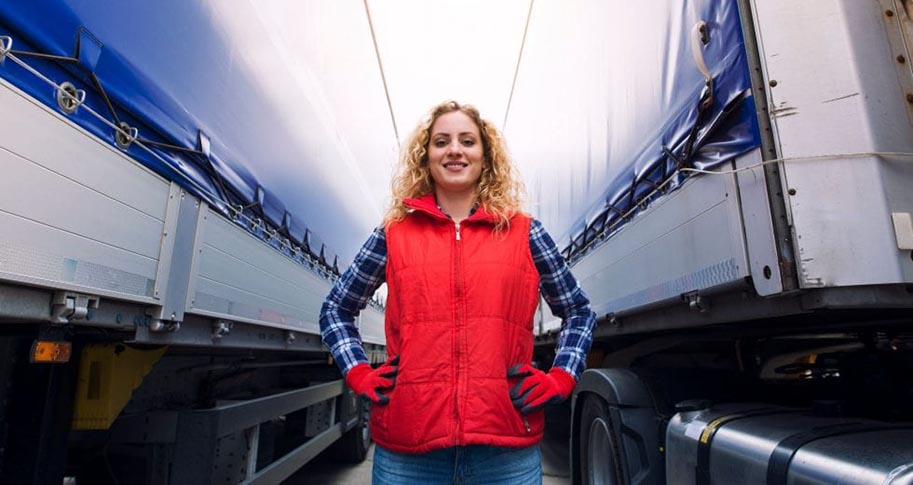 Women have made tremendous inroads in white-collar jobs, such as doctors, lawyers, and corporate managers. They outnumber men in some of these fields, which is perhaps unsurprising since women attain college degrees at a higher rate, too. But women have not broken into blue-collar jobs like truck driving at nearly the same rate. This is unfortunate for many working-class women because trucking offers relatively well-compensated, stable work with low barriers to entry. Recruiting and retaining more female drivers could also help the industry address its long-standing driver shortage. Carriers and industry associations have recently tried to recruit more women, but it’s difficult to gauge those efforts’ effectiveness since reliable industrywide demographic data is scarce and estimates of female representation in trucking vary widely.

Given this topic’s importance, the SCMRC is proud to share the following article by Alex Scott of the University of Tennessee. Scott and Beth Davis-Sramek of Auburn University recently found that far fewer women drive trucks than often reported – but the numbers are trending upward. Below, Scott compares their findings against a few widely circulated figures.

The gender composition of the U.S. trucking work force has received a lot of attention recently. Trucking has historically been male-dominated, and with the widespread driver shortage, some have suggested that the industry should increase the number of female drivers, including a bill before Congress directing the Department of Transportation (DOT) to do so.[1] In this article, I review four estimates of the percentage of female truck drivers, which range from 2-3%[2] to 10%,[3] to help us understand the true percentage of female drivers. The four sources are:

Freightwaves published findings from a survey in September of 2019 that showed that 10% of truck drivers were female.3 To their credit, they provided details about the survey that allows us to assess the survey’s validity. They received 884 responses to the survey, which was emailed to their subscribers. About 25% of these respondents were carriers, and 54% of these operated 50 or more trucks.

A few problems stand out immediately. First, in 2019 there were 465,130 unique carriers inspected by the DOT.[6] Some of these are not truckload carriers; a conservative lower bound is the number of “general freight” carriers inspected in 2019, which was 204,746. At best, Freightwaves received responses from between 0.19% to 0.43% of carriers. However, only 25% of their respondents were carriers, so even those percentages are generous.

Second, 54% of their respondents operated 50 or more trucks. However, again based on “general freight” carriers inspected in 2019, only 2.5% of carriers operate 50 or more trucks. Hence, the sample is highly skewed towards large carriers, which are known to have a higher percentage of female drivers.5 Moreover, it is unclear how Freightwaves weighted the survey responses based on the number of drivers employed by a carrier. Finally, this is based on unverified, self-reported data, which can be intentionally or unintentionally misrepresented.[7]

2) Estimates of 6% to 7%, based on data from the Bureau of Labor Statistics

Estimates of 6% to 7% are widely reported[8], but the sources are rarely described in detail. It appears that these estimates are based on occupation code 9130 from the Bureau of Labor Statistics (BLS).[9] This occupation code, however, does not measure only truck drivers; it measures people classified as “Driver/sales workers and truck drivers.”[10] Many of these occupations are not truck drivers, which can skew the gender profile. To analyze this, I downloaded the underlying survey data for 2019, collected by the U.S. Census Bureau through a survey known as the American Community Survey (ACS).[11]

42,835 people in occupation code 9130 were included in the ACS in 2019, 3,141 of which were female (7.3%). This lines up with the widely-reported estimates. 253 unique industries were represented in this occupation code, the top 10 of which are shown in the table below. While “truck transportation” is the most frequently occurring industry code, it is less than half the sample (35.7%). If we restrict the sample to these workers, we get 5.0% females. Restricting in this manner likely overstates the percentage of female drivers, because survey respondents who are truck drivers for private fleets are, in my opinion, less likely to report that particular industry code compared to for-hire drivers, and females are a smaller proportion of drivers for private fleets compared to for-hire carriers.5 This could bias the estimate of 5.0% upwards.

In a recent study of millions of driver inspections from 2010 to 20195, my coauthor Beth Davis-Sramek and I reported that, based on the first name of the driver who was inspected, 2.6% of tractor-trailer drivers were female in 2010, and that number increased to 3.2% in 2019. Further, we reported that women were most frequently in jobs with large for-hire truckload carriers—about 8.2% of drivers on average for the largest carriers, with some as high as 20%—and a much lower percentage of drivers for private carriers, LTL carriers, and small carriers were women. One point of external validity for our numbers comes from Prime Inc., which reports that women comprise 14%[12] of their drivers, and our numbers for Prime showed 13.1% in 2019. Our numbers are also consistent with the data reported from the CDLIS database discussed earlier.

I reference data and studies so that the reader can reach their own conclusions, but I will briefly discuss mine. The Freightwaves self-reported survey is not a good instrument to collect data or to draw conclusions about the overall percentage of truck drivers that are female. It is highly unlikely that women are 10% of the driving workforce. The BLS does not measure the number of female truck drivers, because they do not directly measure truck drivers, and clearly say as such. Thus, the “6% to 7%” number has little validity for truck drivers. The CDLIS data and inspection data, which are based on actual drivers on the road, align pretty well. It seems that women are somewhere between 3% and 4% of the driving workforce, when all driving jobs (e.g., for-hire, private, LTL, large, small) are considered.

[2] “Predicting Truck Crash Involvement: 2018 Update” from the American Transportation Research Institute (ATRI) https://truckingresearch.org/wp-content/uploads/2018/08/ATRI-Crash-Predictor-2018-Update-07-2018.pdf. This article claims that women are 2.45% of the sample of drivers in a large database, but then claims that women are “6 to 8 percent” of drivers overall (p. 13).

[6] Based on inspection data from the DOT, similar to that used in footnote 5.

[7] For an example of self-reporting biases in a transportation context, see https://www.researchgate.net/publication/346492828_The_Consequences_of_Self-Reporting_Biases_Evidence_from_the_Crash_Preventability_Program.

[9] See the discussion in https://www.trucker.com/drivers/article/21745815/thousands-of-women-truck-drivers-missing; “‘For some occupations that may have similar jobs and a small number of persons in them, they may be combined into one category,’ she [a BLS spokesperson] says. BLS lumps together three groups in their Occupation Titles and Code List #9130. These groups are heavy and tractor trailer truck drivers; light truck or delivery services drivers; and driver/sales workers. The last group consists of drivers who collect money on their routes such as soft drink deliverers, laundry service drivers and restaurant delivery drivers.”