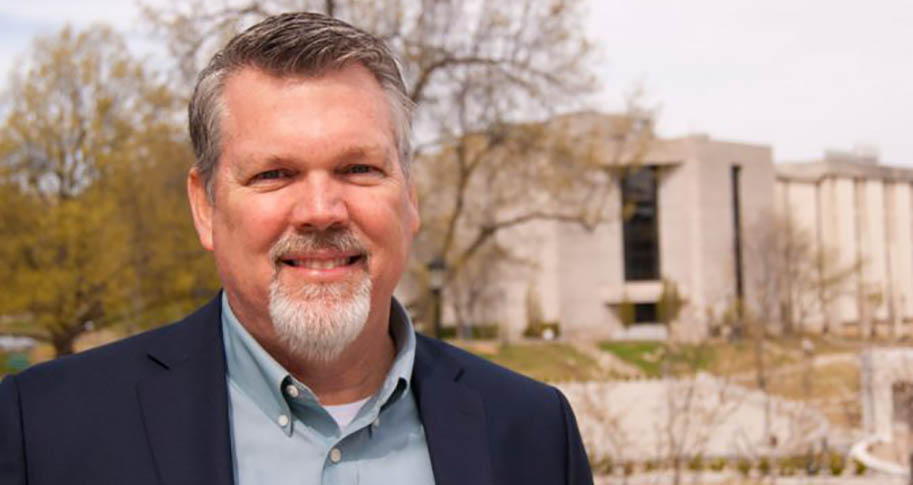 On his first day of class at the University of Arkansas, Billy Yocum sat at an outdoor table in front of Willard J. Walker Hall, consumed with fear.

Could he do this? Was he in over his head?

Yocum’s situation was a bit different from his fellow classmates. For starters, he served in the Air Force longer than most of them had been alive. He didn’t study abroad. He worked abroad, sometimes getting in harm’s way such as when he served in Operation Iraqi Freedom or in Afghanistan in Operation Enduring Freedom. He also endured the sandstorms of Qatar.

And now he was in college, perhaps the scariest assignment of all.

While Yocum sat at the outdoor table, along came J.R. Hinkson, Undergraduate Programs associate director at the Sam M. Walton College of Business, who had been helping Yocum with his transition from NorthWest Community College in Bentonville. Their conversation may have seemed friendly and routine for Hinkson, but for Yocum it was much more. The encouragement from Hinkson was all he needed to get up and head to class.

He kept going to class, and he learned a lot about himself in the process. Along with hard work and support not only from Hinkson but Yocum’s professors as well, he completed his academic mission by graduating May 2016 with a bachelor’s degree in supply chain management.

His military background, enthusiasm and Walton College degree was enough to impress Spectrum Brands, which produces a wide array of products from batteries to pet supplies and garden care. The company hired him to work as a sales analyst in its Bentonville office.

Needless to say, a lot has happened since Yocum left the Air Force in 2010. He has no intention of being a spokesman for a group of people, let alone military veterans, but he can speak for himself. As someone who began his college career much later than most, he has a simple message about college to other veterans like him:

“You think you’re not going to fit in,” he says. “You will. Do not be afraid to succeed.”

He extended that message to his classmates, including those who were also transfer students like himself. Yocum reassured them about any worries, whether it be parking or that the university might be considerably more difficult than community college.

Just like he did when he was in the military, Yocum is tuned in to the dispositions of those around him. Simply saying “hi” to a student can lift that person out of a funk and get them talking, he says. “The job is to look out after your buddy, and your buddy is everybody here,” he says.

Yocum also brought to the classroom his experiences, which he shared with others, says David Hyatt, supply chain management clinical assistant professor.

“He gets the idea of being a learner,” Hyatt says. “Obviously, he’s learned a lot in his life but brings it to the table in a subtle way—a way that is not intimidating to younger students.”

In fact, Yocum tries to help those students. Because of his experiences, and outgoing, amiable personality, Yocum has already developed contacts in the business community. Hyatt recalls one particular case where a classmate was not getting offers that he wanted, and Yocum helped him expand his network to get a better job.

Yocum’s first career began about a year after graduating from high school. Though he went to college for a year at Arkansas Tech University, the military seemed like a better option at the time, so he enlisted in the Air Force, where he spent 24 years and worked his way up to master sergeant (E-7). His main duty was serving as a heavy weapons specialist, overseeing the management of bombs and other munitions. Yocum was injured in Afghanistan, and after hospitalization at Landstuhl, Germany, he received an honorable discharge and returned to Arkansas with his wife and two sons.

What he had in the Air Force – the comradery among his fellow soldiers and military life – was now gone.

“I came back and basically pouted for a year, ate pizza and got fat,” he says.

That’s when he decided to give college another try with assistance from the Veterans Administration and Veterans Upward Bound. He enrolled at NorthWest Arkansas Community College where he took many of his required college classes. He soon learned he was skilled in math and analytics, enjoyed writing and was astute at Microsoft programs. He was also interested in solutions, which made supply chain management appealing as a major. While in the Air Force, he saw the application process of the supply chain but never the formalities, and his Walton classes made them more apparent, Yocum says. As a student at Walton, he also learned about the importance of sustainability and hopes to someday apply it to the supply chain.

“The professors here are amazing,” he says of Walton.

Hyatt “pushes you to think,” Yocum says, adding that Carole Shook, supply chain instructor, “cares tremendously” while Assistant Professor Adriana Hofer provides a global perspective. “Each instructor is amazing on their own merit,” he says.

Though Yocum may have been nervous about his first day of class, Hinkson also recalls that Yocum told him how fortunate he was to attend the U of A.

“He was really appreciative of the opportunity,” Hinkson recalls. “I thought that was really neat.”

Yocum urges all veterans to give higher education a try. “All of those things that made you great in the military will make you great in college,” he says.