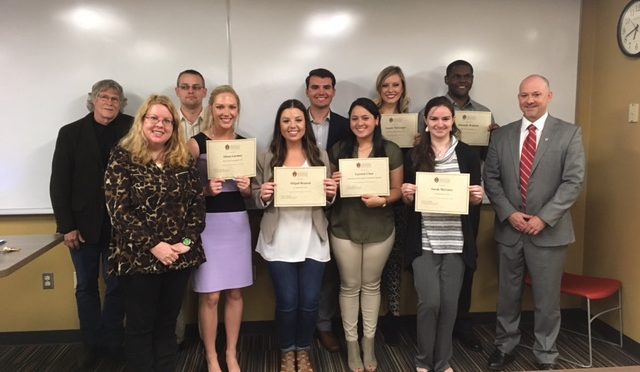 Alissa Gardner, a double major in supply chain management and marketing, received the Sigma Chi Mu Tau Leadership Award. Sigma Chi Mu Tau is an honor society founded at the University of Arkansas in 2016. Gardner has served in leadership roles through Leadership Walton, University of Arkansas Student Ambassadors, Students Acquiring Knowledge through Enterprise and as a community group leader. She has had five internships while in college including at Amazon where she supervised more than 80 employees. She participated in four student competitions including winning the Walmart case competition. The Sigma Chi Mu Tau Leadership Award is given to a graduating senior member of that honor society who has exhibited strong leadership over his or her college career.

Abigail Brazeal and Sarah McGuire received the Ali Arguello Service award. This award represents outstanding service during a student’s college career. Brazeal served in multiple voluntary activities including Make a Difference Day and assisting at school visits. She also served as an officer in a supply chain management club. McGuire served as a volunteer and teacher at her church along with tutoring activities for student athletes.

The Supply Chain Student Club Leader of the Year is Macy Roe. Roe served as the president of Women Impacting Supply Excellence and previously was the vice-president of the organization. In addition, Macy served on the Dean’s Student Advisory Board and as a Walton College Student Ambassador.

The Matthew Waller Leadership Award went to Manuale Watkins, who served as the two-time team leader of the Arkansas Razorbacks basketball team. He managed team meetings and demonstrated leadership behavior on and off the court. He was also a member of the homecoming court.

Five members of Sigma Chi Mu Tau were named outstanding seniors. They are: