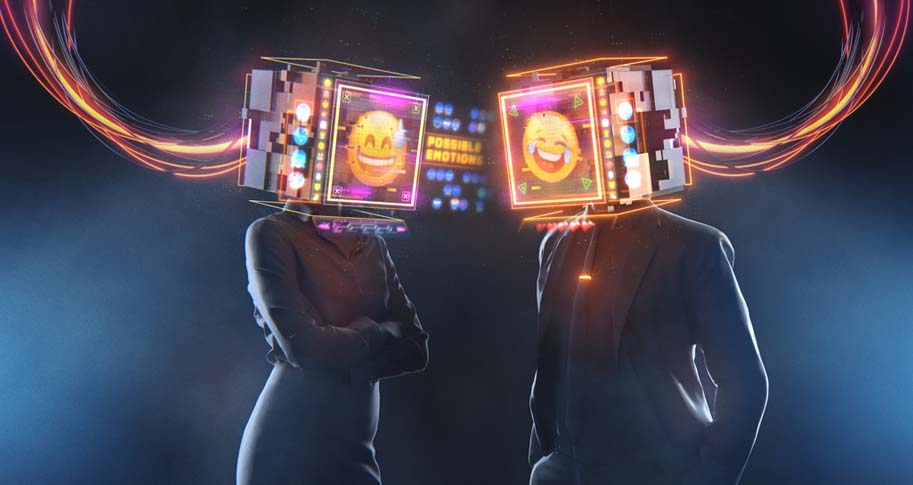 Images are some of our most basic forms of communication with the world around us. We learn the meaning of shapes and colors before we learn letters and words. In some cases, images are so pervasive in our culture they actually affect the way we speak. Many people just say “I heart blank” now because of variations of the I-♥-NY logo.

Researchers have studied the effects that simply smiling can have on people around you. A smile signals a positive attitude that is contagious and spreads easily to other people. There are also indications that this works even when people cannot see you smiling, such as talking on the phone. Researchers Leah Warfield Smith and Randall L. Rose address the use of symbolic smiley face emojis in their article, “Service with a smiley face: Emojional contagion in digitally mediated relationships.” One of the big questions they seek to answer is whether these smiling emojis convey the same sense of positivity and assurance that a face-to-face smile does? 😊

The smiley face was employed in marketing and art long before we began texting one another. In terms of marketing, this type of research has become necessary as more advertising takes place through text messaging and social media posts. Relationship strength was a primary focus of the study and denotes “the result of trust, commitment, and relationship satisfaction between the service provider and consumer.” This study is different in that researchers are analyzing the role smiley face emojis play in consumers’ affective reactions in lieu of face-to-face smiles.

An affective reaction is when something causes or has an effect that changes your mood. Someone speaking to you in an accusatory tone with a frown on their face makes you angry, but someone could just as easily smile while they say it and put you at ease. Either way, the body language is meant to elicit some sort of behavioral response beyond the words spoken. An inferred reaction would be a perceived meaning that may be inaccurate. The message was meant to elicit a response or change in your behavior.  An example is a person who is not making eye contact with you during discussion. Are they preoccupied or just plain rude? The perceived slight of a person’s inattention to you may just be in your head. Digital communication is even more confusing than this. The absence of body language and intonation makes determining things like sincerity and sarcasm difficult.

Visual cues can affect the way you interpret or “react” depending on whether you are in emotional agreement with the sentiment. If you are in a good mood, someone smiling may lift you even higher. In a bad mood, someone’s ridiculous grin may only exacerbate your foul mood.  The “contagious” nature of this transfer of emotion is dependent on whether you are receptive to it in the first place. As easily as we can run a stop sign because we are distracted, we are also likely to misinterpret or miss the smiling cue altogether. It should also be noted that these contagious effects are not always positive in nature. Many times, visual imagery may be used to create fear to compel consumerism or warn people. We’ve all seen enlarged photos of ticks and mosquitoes in bug repellent advertisements, or very distinct symbols of alligators and shark fins in places where it may be dangerous to swim.

The transmissible nature of this interchange is both conscious and subconscious. Current theory suggests that this exchange of emotions through visual cues is a two-step process. First, you begin by subconsciously mimicking those around you. We have covered this phenomenon in past Insights articles looking at the negative effects of this phenomenon due to attacks on companies and CEOs. In that research, victimization theory was used to examine such phenomenon. Terms like “demoralizing” and “hostile workplace” are often used to describe this contagion of negative attitudes from the top down. By comparison, the example of the contagious effect of a single person smiling can be exponentially increased if you are seeing numerous people smiling. The second part is when you begin to internalize this positive attitude and actually feel happy. And now you may be the transmitter.

When there is some degree of trust and communality between consumer and marketer, research indicates that smiley face emojis work and affect customer satisfaction. However, this effect depends on that communality: you must be open or receptive to the message in the first place. That communality requires some sense of reciprocation: both parties must be considerate of each other for the brand loyalty or trust to exist.

When the relationship was mostly commercial, these emojis did not have any effect. A new customer has no brand loyalty or even familiarity, in which case such graphical sentiments are lost on them. A regular heart symbol or smiley face on a box of cereal may not register with us as consumers. But if the symbol represents a group we associate with, such as the American Heart Association’s “Heart Healthy” heart symbol, it registers with those of us in the watch-your-cholesterol community. The AHA logo conveys credibility and trustworthiness.

It matters what type of communication the emoji appears in. A smiley face emoji at the end of an email from a teacher about your child’s success may have more communal power than the emoji at the end of the form letter emailed to the entire school. The nature of the relationship between the form letter to the masses and the personal letter may be too different to achieve the same effects with the same emoji. In this case, there may be a perceived inference of sincerity in one and not the other. We can also flip this and note that there are some mass communications we expect certain symbols or emojis to be on. The little holographic stickers that tell you that you are buying an officially licensed Arkansas Razorbacks t-shirt or cap is one example. Consumers can trust that if it was approved by the University of Arkansas’ branding and licensing process.

Understanding how emojis work in the current communication landscape opens the door for potential marketing strategies. The authors used the example of Bank of America’s tagline, “Life’s Better When We’re Connected.” This sort of tagline sets up the use of less formal and more personal approaches to messaging. In modern grammar, contractions like “life’s” tend to be perceived as less formal. The use of “we’re connected” implies a shared connection between us and the company that makes a smiley face emoji at the end of a message resonate with us. Consciously, nobody thinks the bank is now their close friend. But subconsciously, “we’re” registers as a two-way connection. “Connected” subconsciously confirms we are in fact connected (even if just because the ad told me so). And, if they put a smiley face emoji at the end of the message, it subconsciously confirms or assures us that we, or at least they, are happy about it.  The smiley face emoji thus functions the same way a “sincerely” or “with love” at the end of a handwritten letter does. Both depend on a level of communality that dictates the tone that can be taken between authors and audiences.

The idea that a smiley face emoji could make or break your marketing campaign may be too extreme, but if that emoji could put you over the top, then it is worth analyzing to see how and when it works. A wide array of marketing formats is available today, some with minimal operating costs.  One of the most unique aspects of modern marketing is our ability to send our messages directly to consumers’ phones, tablets, and computers.  The personal nature of marketing directly to someone’s phone or computer means that these are the most likely places you will use and see a smiley face emoji. The question then becomes: How personalized your marketing strategies should be?

The mass ad emailed, posted, or sent to millions of people about a sale may lack the communality for an emoji to register. For example, we might respond differently to an emoji that appears in a television ad versus an emoji at the end of a text message. The first is not directed specifically at one person, whereas the text will at least be perceived as being or implied to have a more personal connection. It may also be the depend on whether the consumer “opted in” to the communication in the first place. The person must be receptive for anything more personalized to work.

Bottom line, the smiley face emoji may seem inconsequential. Technically, it is just the combination of punctuation, a colon and a right parenthesis. Over time it has become a tiny image, or emoji, and began to take a more cartoonish, but human form. Instead of a sideways textual face, it became the happy face most of us have been drawing since before we learned how to spell. It’s why we used the opposite, Mr. Yuk’s frowning mug, to warn kids away from poisonous materials. There is something primal about the symbol of a face smiling or frowning. Like John Berger says, “Seeing comes before words. The child looks and recognizes before it can speak.” When we grow up, that subconscious method is still hard at work, only now it is laden with all the baggage of adulthood.  This affects our receptiveness to the message. Maybe we are in The Undisputed Truth’s camp and untrusting of “Smiling Faces Sometimes.” In this case the smiley face emoji has no effect on us or may be misperceived altogether. But on a more personal level, some of us, including Sia, are of the opinion that “You’re Never Fully Dressed without a Smile.” In which case, a smiley face emoji may be just the ticket to sway that consumer’s purchasing decisions. 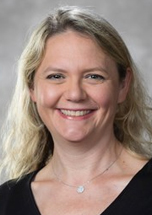 Leah Smith is an assistant professor in the Marketing Department at the Sam M. Walton College of Business. Dr. Smith’s research interests center around marketing relationships from the consumer point of view. Specifically, she focuses on how changes in technology impact the formation and perceptions of marketing relationships.