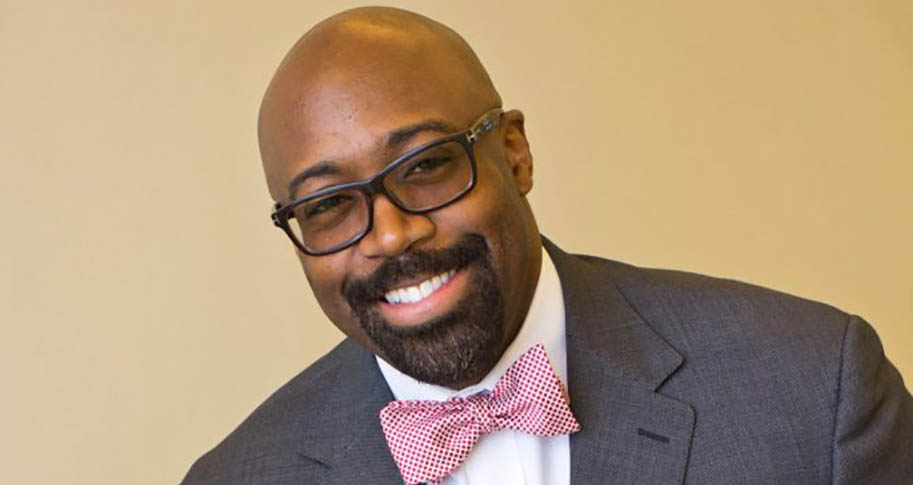 The counselor was on the board of trustees for Philander Smith College, a historically black liberal arts college in Little Rock. She worked diligently to get Esper funding to attend the school so he could become the first in his immediate family to earn a college degree. He was unaware of the historical significance of the 1957 Little Rock Central High School desegregation crisis, the students who helped integrate the school – known as the “Little Rock Nine” – and their adviser, Daisy Bates.

“I arrived to Arkansas not realizing what it meant to be in the South,” Esper says.

That experience kept drawing him back – most recently, as an associate professor for the Department of Supply Chain Management and holder of the Oren Harris Endowed Chair in Logistics at the Sam M. Walton College of Business, which he assumed early this year.

Majoring in mathematics at Philander, Esper interned at the Arkansas State Highway and Transportation Department, researching the states’s commodity flows and surveying truck drivers. While interviewing truckers, one in particular was not too pleased to be interrupted and told Esper it was delaying his delivery. Esper says for the first time, he realized these different tractor-trailers were hauling products and were committed to schedules. “So, a truck driver in Fordyce, Arkansas, told me about logistics,” he says.

Esper says this information opened up his world. He enrolled in Walton College’s MBA program with a logistics and transportation concentration and, after graduation, worked as a senior transportation manager for Hallmark Cards in Kansas City, Mo. Two years later, he says he “got the itch” to pursue a Ph.D. He returned to the University of Arkansas. “The reason why I came here was because it was home,” he says.

After graduation, Esper became an assistant professor of logistics at the University of Tennessee, where he was eventually granted tenure and an endowed professorship. But so much of his formative years had occurred in Arkansas. Its rich history and role in civil rights also had deep meaning for him. He and his wife, Mishi, discussed “coming home.”

Esper returned to the University of Arkansas on a research trip. While staying at the Inn at Carnall Hall on campus, he woke up at 5 a.m. and walked out on the lawn. He knew he would be back.

“It was like something came out of the soil and grabbed my ankles,” he says. “The feeling of ownership and connection here is beyond what I could ever imagine.”

This fall, Esper will teach an honors colloquium class in the same rooms where he once studied. He will also teach graduate-level supply chain management courses.

Much of his research relates to the strategy aspects of the supply chain, such as the strategic orientations and relational structures that facilitate excellence in supply chain management execution. His findings have been published in Journal of Business Logistics, Journal of Retailing, Journal of the Academy of Marketing Science, Transportation Journal and others. He also has been named an associate editor of the Journal of Supply Chain Management.

Though Esper spent many years at the Walton College as a student, he says he feels like fellow faculty – some who taught him – respect him as a colleague and not, as he puts it, “a glorified doctoral student.”

“The good thing about going home is that you hope you will be surrounded by family,” he says. “I feel like it’s a family environment.”